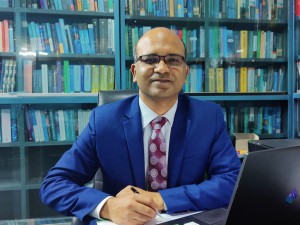 Bangladesh is one of the 54 ocean-facing nations Bangladesh having a marine area of 118,813 square kilometers. It is a fact that Bangladesh has the sovereign control on an area beyond its coastal line almost three-fourth the size of its land mass! And we used to pay a very little attention to it. In the last decade Bangladesh secured its maritime boundary dispute with the neighboring countries of India and Myanmar. Thus, it opened up the avenue for studying and acquiring the economic and marine resources of the Bay of Bengal.

Around the same time the foundation for establishing the Department of Oceanography was laid at the University of Dhaka in 2012. The department aims to become center of excellence for providing oceanographic education and research in the South-East Asian region within the next decade. Since its inception, the department has organized workshops, symposiums, international conferences in order to disseminate the opportunities created by Blue Economy among students, scholars, peer group researchers and young scientists. The department has memorandum of understanding (MOUs) with top universities and research institutions in China, India, Japan, and Australia to collaborate on oceanographic research and examining possibilities of sustainable extraction of economic resources in the Bay of Bengal.

With this keeping in mind, here at Oceanography Department of Dhaka University, the graduate and undergraduate courses are crafted in a way which develops skilled human resources in the job market who will be the intellectual rangers to safeguard Bangladesh’s marine resources. Moreover, the department follows cutting edge teaching methods that satisfy the needs of the contemporary society as well as for the students. The graduates from this department have amply demonstrated ability in the areas of problem solving and analytical methods, teamwork skills, and the potential for leadership and life-long learning. For harnessing the practical skills of the students, the Department has routinely joined forces with Bangladesh Navy to organize ocean-going cruises in the bay. The students can be able to gather hands on experience on collecting scientific data in Bay of Bengal.

In the years ahead, we will continue to be driven by the same values that have defined us since the department’s founding days: a pioneering spirit, a commitment to innovation and long-term vision. Above all, we remain steadfastly committed to upholding the highest academic standards and driving value for our students, faculty members, and admin staff members.

Department of Oceanography, University of Dhaka